If we think about natural stone as a construction material, the first thing that comes to mind is that it is a heavy material of high resistance and durability. We usually don’t think of the latest generation of stone sandwich panels. Instead we review its use since prehistoric times in buildings that are still standing. However, if we study it in detail, the reality is that natural stone is a material whose mechanical behavior is quite complex to analyze. In this article, we will explain it in-depth and show how we can use technology to improve its mechanical properties.

All stones have different degrees of homogeneity, isotropy, and continuity. The better these values are, the more similar their behavior will be to that of a material with elastic behavior (proportional stresses and deformations which can be easily calculated). In any case, there are some very evident conclusions that we can highlight: 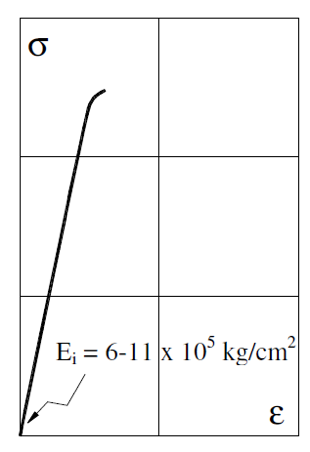 History of stone applied to architecture

For the last five millenniums the human being has been searching for a way to bring the stone to its best as a construction material, considering its mechanical nature and therefore optimizing its economy.

In the article we published about the history of architecture with stone, we already explained how the first constructions used stone in a simplistic and not optimized way as construction material. We talked about Stonehenge, where vertical menhirs work without any problem at pure compression, while those placed horizontally, as a lintel, have many more limitations. By functioning as a biapoyada beam, which experiences a maximum momentum in the center of the span, the stone is being used in a way where it is being put in difficulty, as it has to cope with tractions in its lower part (and compressions in the upper part, which, however, are not problematic). This means that the distances between supports are very small (very short lintel spans) and that, to be able to cope with this bending, a stone lintel needs to be generated with quite a lot of edge (implying a lot of weight) that provides inertia, and therefore greater geometric rigidity.

In this same article we commented on how the ancient civilizations continued with lintel architecture (Greece, Egypt…). The Roman Empire, in turn, popularized the use of the semicircular arch to achieve greater spans (making the stone work at its best, only by compression). We talked about how in the Middle Ages the Gothic architecture and its pointed arch surpassed the optimization of the Romanesque. Finally, we approached the architecture through the use of Gaudí’s catenary arches, which achieved the maximum compression optimization of the arch, without generating lateral efforts that had to be counteracted with buttresses, pinnacles, and flying buttresses.

The technology of the Stonesize natural stone sandwich panels

Now, let’s focus on understanding how the “sandwich” technology, which began to be widely used in the 20th century, is a perfect complement to stone. The “sandwich” technology has already been optimized to the maximum as a monolithic material working as its nature demands, in compression, and therefore technology contributes to the stone just what it lacks:

The technology of natural stone sandwich panels, compared to monolithic slabs, manages to increase rigidity very powerfully by separating the same mass from the center of gravity of its section. In the following image we can see how, if we split the same thickness of the material and separate it, we manage to increase its rigidity considerably because we are increasing the momentum of inertia of the section:

This implies that we can achieve the same objective rigidity by reducing material (and therefore weight), just by transitioning from the use of a monolithic plate to a sandwich configuration.

This is not a human invention, but nature uses this strategy to optimize the strength of materials. A good example can be found in the structure of the bone that forms the surface of our skull, with a sandwich structure. The logic of evolution led to this result, to obtain a surface of high resistance in order to protect the brain, while at the same time not being dense and heavy (since a very heavy bone structure in the head would have made our center of gravity rise, to the detriment of our equilibrium).

In the manufacturing process of sandwich panels, high-strength materials are usually used for their outer skins (metals such as aluminum or fiberglass with epoxy resin, as in our case).

When faced with bending stress (caused, for example, by a surface wind load on a panel), one of these high-strength skins will work in traction and another in compression.

Let’s not forget that we need something that will keep these skins in place, separated by the distance mentioned above. For that, we need the core of the panel. We look for the least amount of material possible and its maximum lightness. The core, in the face of this bending effort of the panel, is the one that must absorb the cutting efforts (whose tensions are of a much lower order than those of compression or traction in the skins).

Ours is an aluminum honeycomb core. The use of this geometry is not accidental. Hexagon is the best geometric form to divide an area into equal cells with the smallest possible perimeter. It implies the least use of material and therefore achieving maximum lightness and economy. For example, nature, in its infinite wisdom, had obviously already reached this perfect optimization in the honeycombs. 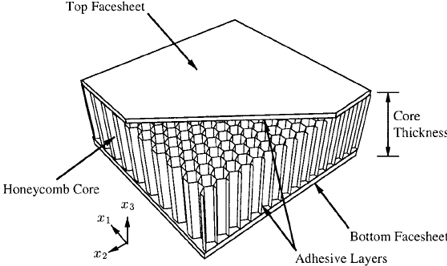 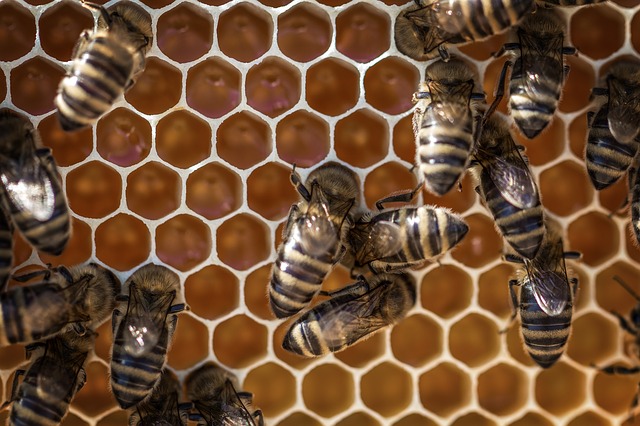 The next step is the combination with natural stone. We manufacture a composite panel in which a thin sheet of stone (which, let’s remember, would have very limited mechanical resistance to traction) is adhered to a sandwich panel of reinforcement on its back, which provides the necessary rigidity so that the stone does not suffer and the whole panel reaches extremely high levels of mechanical resistance.

As with all composites, the mechanical properties of the composite material are not equal to the sum of the properties of its individual components, but complement each other and generate a new material with much more powerful features.

As a result, we can generate large format panels with a 100% natural stone finish (which can be given the usual treatments and textures), but in an ultra-light way and with very high resistance. 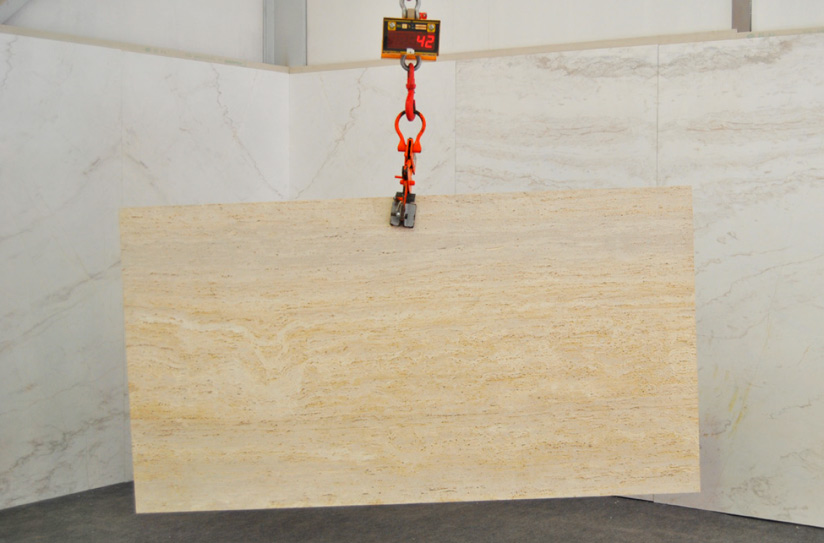 Any architect can imagine that the possibilities to realize new designs, which were impossible until now, are infinite with this proposal of value linked to the large format ultra-light natural stone panels.

In addition to achieving a magnificent ultra-light mechanical performance with very little thickness, we are talking about natural stone leaving behind its quality as a fragile and heterogeneous material. Among other things, it becomes a highly technical material with great safety against impacts, since even in the unlikely event it breaks, it will not suffer a fragile breakage. The stone will be held by the panel itself, even if suffered breakage.

If you want to know more about natural stone sandwich panels, visit our products page or contact us >