The façade is the face of each building, and a natural stone singular façade makes it unique and unrepeatable.

The word façade appears for the first time in the Renaissance-period, when in the treatise “De re Aedificatoria” (1485) Leon Battista Alberti refers to a privileged face of the building that, as if it were a human face, has its own identity within an organic whole that is the city. The Basilica of Santa Maria Novella is a magnificent example of this. Its side façades are quite austere, finished in brick. In contrast, its main façade, the one facing the square (completed by Alberti in 1470), is a doorway that presents the building to the city and organizes its relationship with it. As it could not be otherwise, its elegant and masterful design is carried out with noble and exquisite materials, white and green marbles. 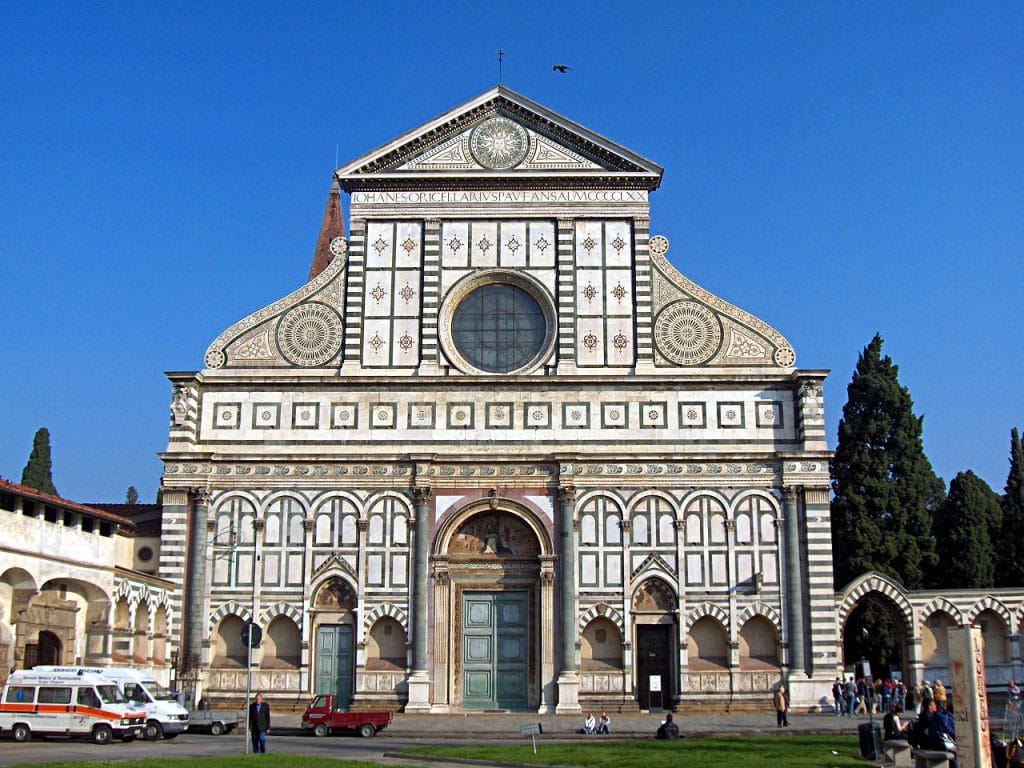 Our way of understanding and making architecture has changed greatly since the Renaissance. Our concept of facade today has many more levels of complexity and is much more related to the global and multidirectional envelope of the building: A skin or membrane that covers all sides (vertically, but also inclined or horizontally) separating the interior space from the exterior.

However, our way of perceiving the city and the impact that the facades of buildings cause in us has not changed. Aldo Rossi, in the book “The Architecture of the City” (1966) of the “locus of collective memory” talks about the way the city is conceived as a sum of the perceptions, experiences, images, and memories acquired by its citizens. The city is drawn on a mental map conceptually articulated by a series of landmarks, the monuments, and buildings that leave the most significant impact on us.

In this sense, the external image projected by our buildings generates an imprint that refers not only to the building itself but also to the city, since it is a constitutive part of it.

Just as we distinguish people by their faces, we use that same mechanism of purely visual identification for buildings. The facades are the material limit which allows us to shape the unique exterior image that we link conceptually to a particular building.

There is great potential in shaping the external image, but also great responsibility. It is perfectly natural for architects to seek a singularity for the external image they want to give to the buildings they project. However, it is a game of seduction that the architects must play with infinite sensitivity to the context surrounding the building and its insertion and dialogue with the environment.

The natural stone singular façade and the large scale: ingredients of monumentality

Natural stone has always been linked to this concept of monumentality. The ancients already understood its timeless character and erected impressive buildings of enormous dimensions with natural stone, to make them last forever. 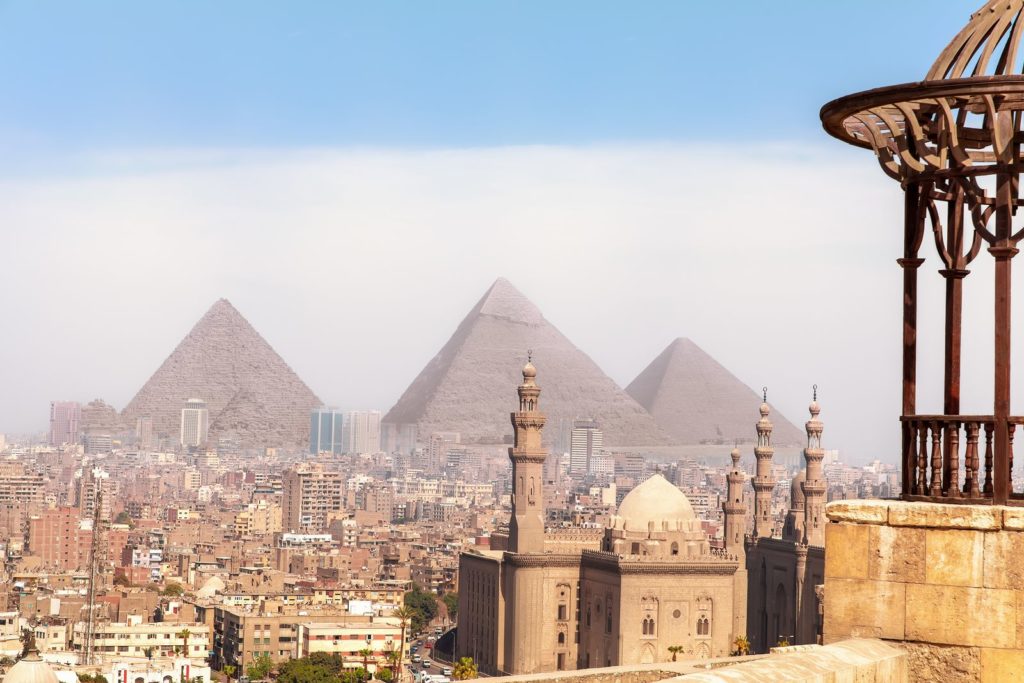 One needs to look only at the building designs of Boullée (1728-1799) to understand that the massive scale of these pure geometries was partly what gave the buildings their monumental character. 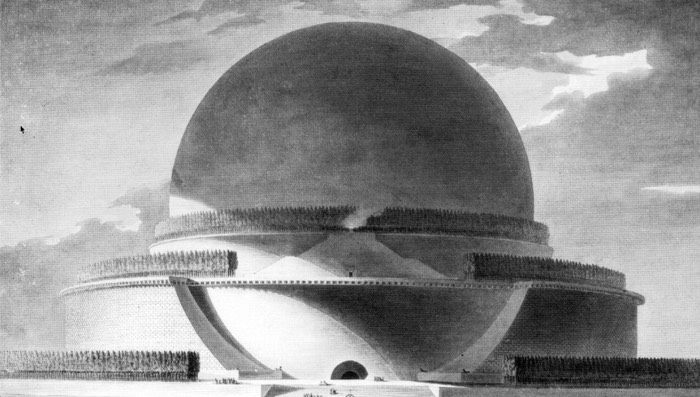 While Boullée worked with utopian designs that sought “the sublime”, we also find constructions that have materialized this explicit search for monumentality, as it is the case with Louis Kahn’s architecture. Once again, it is the loss of human scale, which leads us to assimilate it into a superior, magnificent, and giant order, which generates this sensation of monumentality. 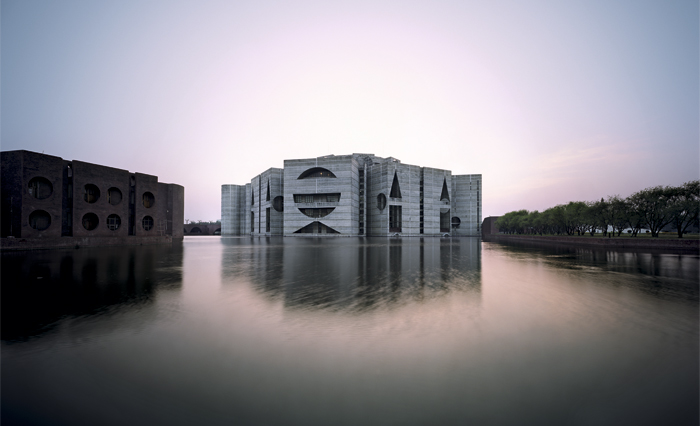 When the stone stopped supporting the buildings and started covering them

In our more recent history, human beings have left behind the use of natural stone as a structural material. They placed more value on its aesthetic character, transferring to our artificial environments the warmth of a natural material, giving the architectural surface the quarry’s infinite expressiveness, something impossible to achieve for a synthetic material.

However, if in the past we talked about eminently heavy constructions, where massive ashlars worked perfectly by compression, nowadays we look for the most considerable lightness, both in the structure and in the enclosures of the buildings. From the very beginning the search for lightness stood in direct conflict with the use of natural stone, a material which, by default, is heavy and fragile. Slabs (which are bending in the wind), with industrialized mechanisms for fixing, have encountered many limitations in terms of format. The industry has always sought to go to the smallest thickness that works mechanically (usually 3 cm), while finding its size limits in its weight.

Otto Wagner (1841-1918) wanted to make a technological leap forward in his building for the Vienna Post Office Savings Bank by using stone as a mere cladding. To do so, he deliberately used visible staples for the small marble sticks that covered the façade, taking advantage of their aesthetic. In this way, in a demonstration of constructive sincerity, he showed with total transparency that it was not a work of masonry, but a mere covering. 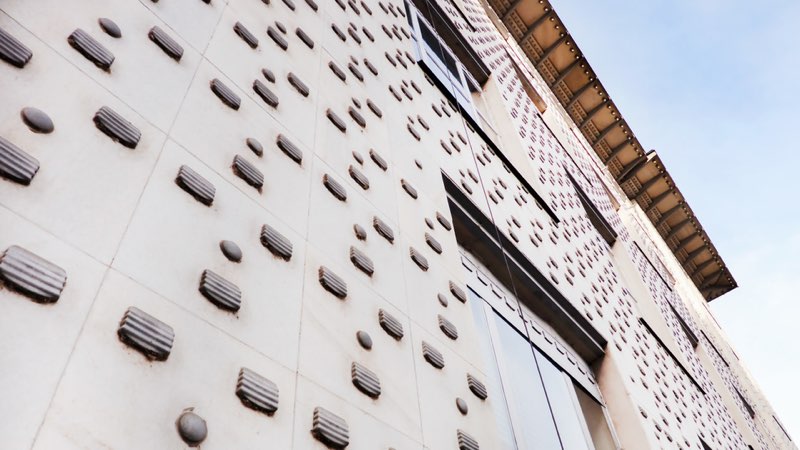 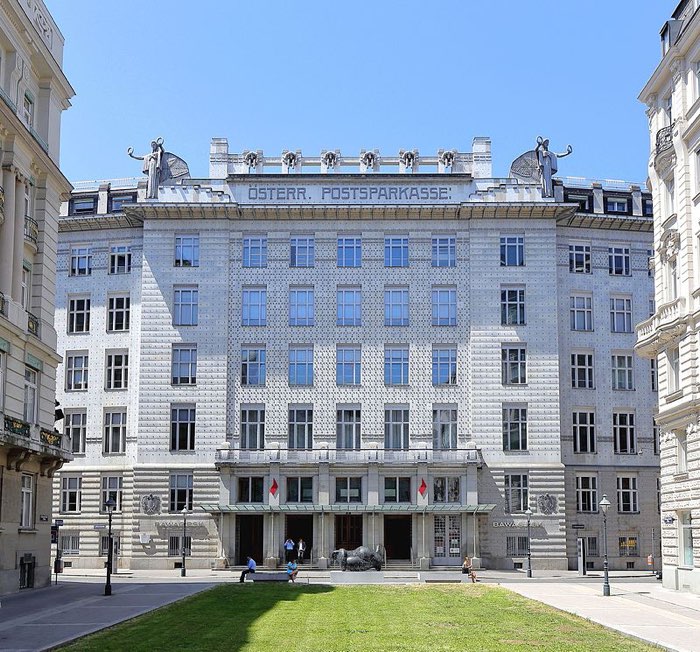 Stonesize breaks the barriers of stone as a covering material

Stonesize technology breaks these barriers and limitations and provides architects with a new design tool for natural stone singular facades. Stonesize allows the use of natural stone panels in giant format combining lightweight and resistance. Any stone in any texture can be conceived for a lightweight facade on a scale previously unimaginable. 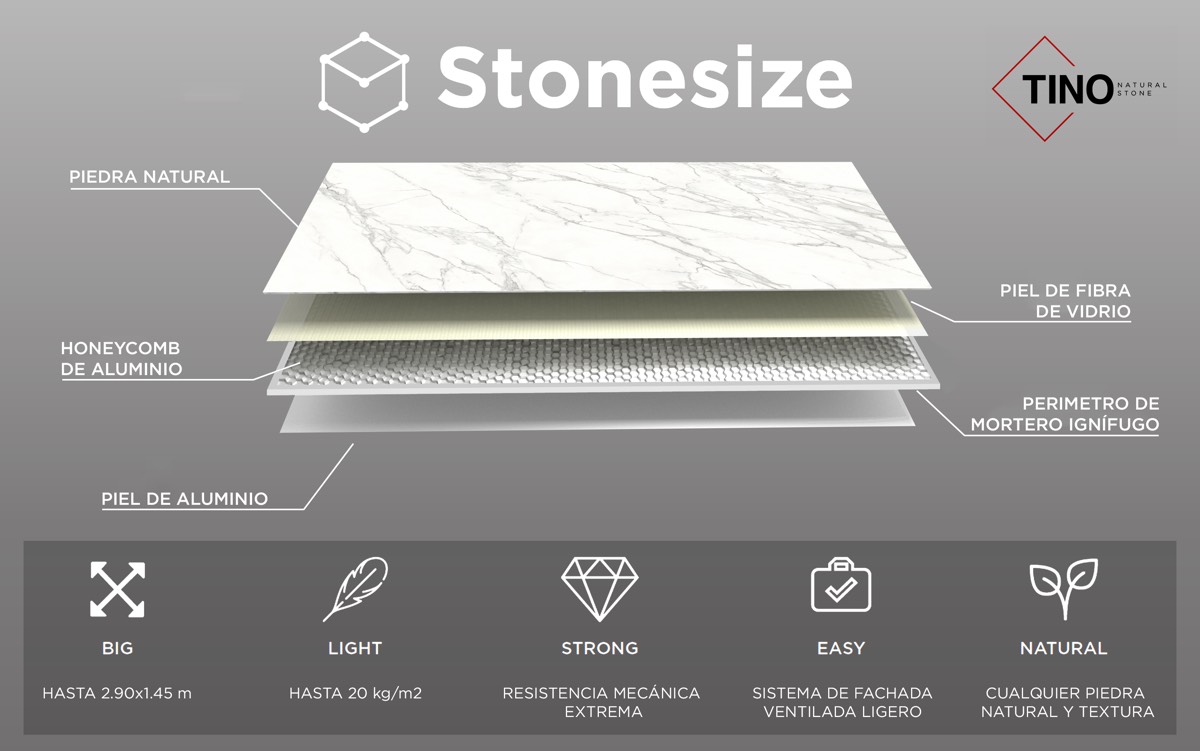 Stonesize opens up a new horizon of possibilities for the use of truly unique natural stone facades, differentiating them from the cladding that has covered our buildings for decades, with a range of small and highly exploited formats.

In ventilated facades, its dimension in giant format does not prevent them from being installed manually, as its weight is 20 kg/m2, as opposed to the 80 kg/m2 that the 3 cm cladding of the small format had.

Its light and ultra-resistant character also allow its use to be extended for all types of prefabricated light elements (slats, columns) or its inclusion in industrialized facade construction.

Do you have any doubts about the application of Stonesize in facades? Do you want to know more about natural stone singular facades? Contact us: