In this post, we present a case study in which Stonesize is used as a cladding material, forming industrialized facades panels and taking full advantage of its value proposition (large-lightweight-natural-resistant-easy to install).

As architecture and design fans, we decided to elaborate a Case Study about a building with a unique facade. It is the IBM Building in Madrid by the architect Miguel Fisac (1913, Daimiel – 2006, Madrid), located in the Paseo de la Castellana and dating from 1967.

We chose this building for being one of the most beautiful references for a façade made with prefabricated modules that we have in our country. In this case, we are talking about hollow modules of prestressed concrete (the famous “bones” of Fisac) with a V-section, filled with insulating material, placed alternately facing the interior and the exterior, among which the carpentry was placed later on site.

Its geometry as a façade with folds generates a large amount of shaded surfaces which help to deal with all the solar radiation the western façade is exposed to. At the same time, it provides diffuse lighting in the interior, something that took precedence over the views as a project requirement, maintaining a high level of privacy. The rhythm imposed by the prefabricated elements and the play of shadows cast by the sun generates a facade of high plasticity, an icon of Madrid’s architecture of the second half of the 20th century.

Using this as our inspiration, we asked ourselves how a similar facade could be executed today, which seeks the same geometric play of shadows to confront excessive sunshine. How could the industrialization of the facade be taken to its ultimate consequences resolving with today’s infinitely more advanced technology whole modules that give answers on their own to the entire necessary performance level. How could we release prefabricated elements from the exposed concrete finish which was seen as the only alternative? Would it be possible to execute modules using 100% natural stone in large format and in an ultra-light way?

Stone cladding for the world of industrialization

In this case study, we use Stonesize panels to clad modules of a lightweight unitized facade system. The example is composed of only one type of module but in two symmetrical versions. Both modules alternate, both horizontally and vertically, thus achieving the desired aesthetics.

The unitized system modules have a perimeter frame that covers the entire system of seals that allow for waterproofing between all the modules, which are arranged on the facade in a grid. Within each frame, a substructure is included to generate the relevant geometry. Between this structure, the insulation panels, the window frames, and window glasses are arranged, producing a whole waterproof and insulated surface within this perimeter. Finally, the Stonesize cladding is arranged with the compatible fixing system that we will explain later.

Stonesize panels allow generating large formats (whole slabs of natural stone, maximum 2.90*1.45 m). This giant format enables us to use only a few pieces per module, of significant dimension. If we add the possibility of gluing together mitered corners, we achieve the appearance of large blocks of solid stone. In this way, only a few joints remain visible, providing a powerful monumental effect. The low weight of these panels, 20 kg/m2, allows us to treat it as an ultra-light cladding material, but at the same time, we are achieving the aesthetics of a heavy, telluric, stereotomic facade. 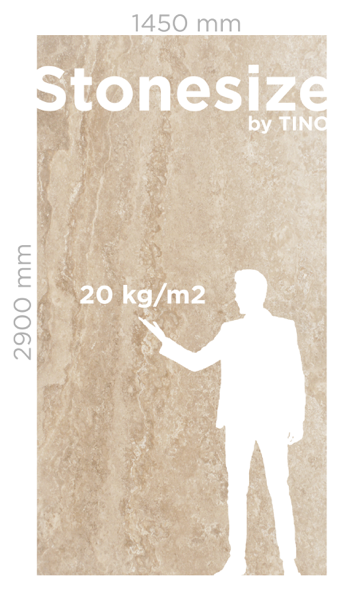 Stonesize panels end in a thin sheet of 100% natural stone. Unlike synthetic materials, where patterns are printed and replicated, in this case, we transfer the expressive universe of the quarry to the facade. The user can touch the stone and recognize it as material from nature. Any texture can be applied to the material (sandblasted, honed…). 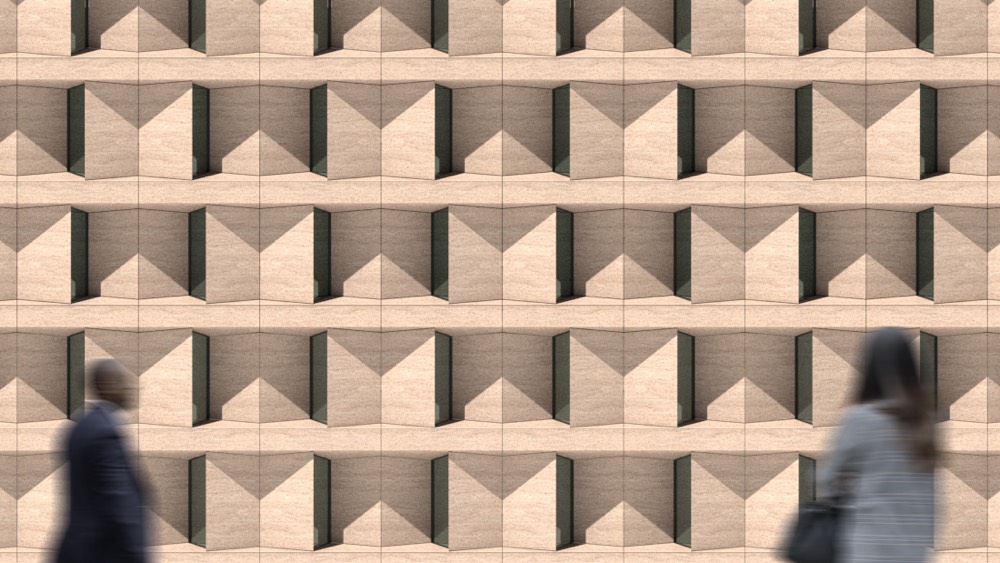 Stonesize provides all the sensations that a natural material brings to the architectural experience, transmitting warmth and talking about the variable of time of the material. The formation of this stone is the result of millions of years of evolution. In the human dimension of time, this stone will evolve as a living material over the years

Stonesize is a highly technical material. As we analyzed in previous posts, taking advantage of the aluminum honeycomb core sandwich panels, a panel with spectacular physical-mechanical characteristics is generated. This tremendous mechanical resistance is also another perfect complement for the industrialization of facades. Stone was not traditionally included in industrialized facades before, not only because of its weight problems (which we have just overcome in the previous explanation) but also because of its fragile nature. With Stonesize, the risk of breakage practically disappears, making it ideal to include in modules that have to undergo an industrial process, transport to site, and lifting and installing, since this type of risk is negligible.

Modular facades are used for buildings such as towers, with the highest mechanical demands in terms of wind action, to which Stonesize can respond without a problem.

Not only is it now possible to lay ultra-light and ultra-resistant stone, but it can also be laid in the large format that was never reached before due to its weight and handling barrier on facades.

When we talk about Stonesize in facades, we do not limit ourselves to the panel itself. We also cover the fixing and leveling system. In this sense, as can be seen in the case study presented here, the Stonesize panels are riveted in their aluminium back skin with clips, compatible with hanging profiles that will be fixed in this case to the rest of the module (on other occasions, fixed to the vertical profiles of an aluminium ventilated facade system).

Of course, fire safety is another property that can never be neglected when it comes to lightweight facades. In that sense, Stonesize panels are tested to provide maximum guarantees. Their mortar edges auto-protect the panels, as all their exterior surfaces are fireproof, as we discussed in the fire section. 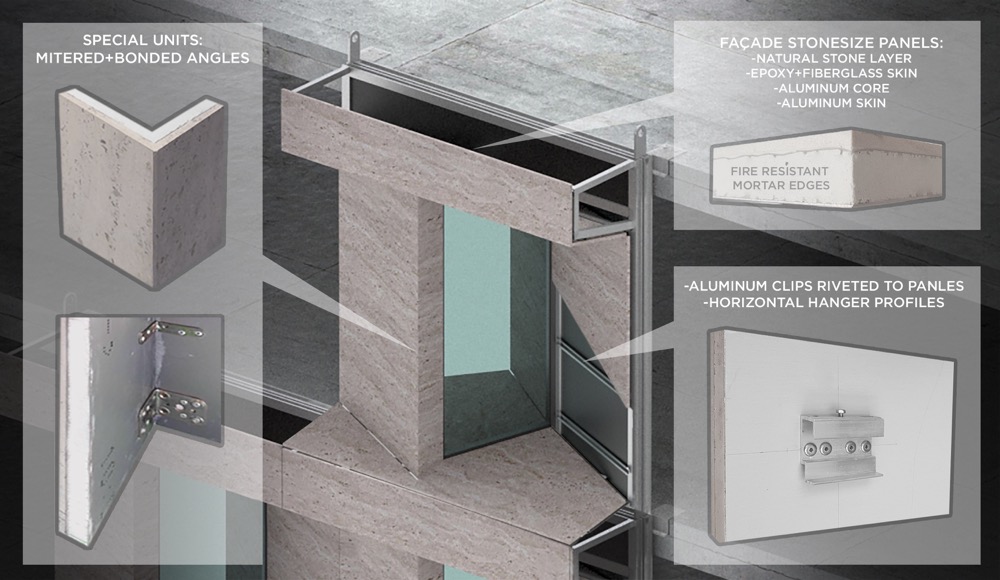